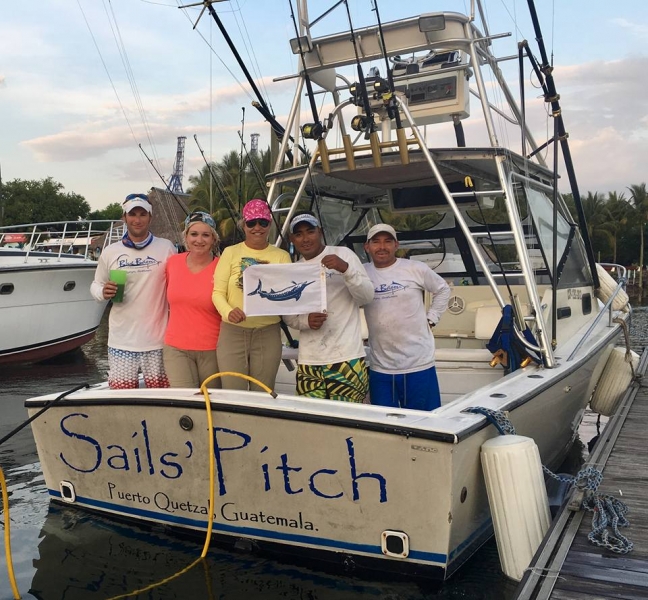 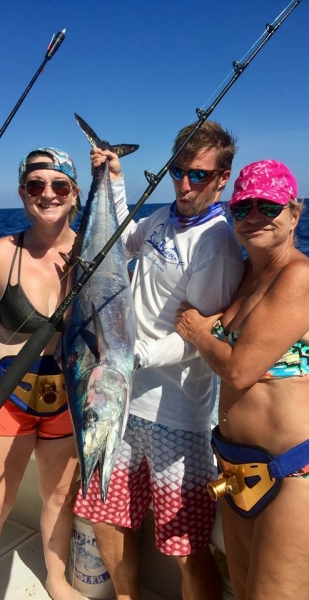 We were making a turn on a hooked sailfish with all the teasers and bait out of the water, about to back down on the single sail, and then a giant blue marlin shows up in the wash, about 5 yrds off the transom.  A quick pitch of the mackerel and she inhaled it!  TIGHT!!  Now we have a double, stretched out sailfish one way, a blue which we would soon learn is over the 600 lb mark going the other way in a hurry.  We quickly released the sailfish, and screamed in reverse for the blue, 3 hours of tug of war began with the final technical release on the 50 lb test.  Strong fish!  We only got a clear glimpse of the beast on the initiation run, not enough camera men to capture this big girl on film.  That was our 2nd marlin bite of the day, and the last month has had a similar plot.
Two ladies from Laredo Texas fished two days on the Sails Pitch.
Oct 26-27
Day 1:
2-2-1 Blue Marlin
12-8-6 Sailfish
4-3-3 Mahi Mahi
1-1-1 WAHOO!  That's right we got those too!
Day 2:
2-2-0 Blue Marlin (good bites)
21-18-14 Sailfish
2-1-1 Mahi MahiTo the east, nice blue water, great temp.  If you have the hot boat & teasers its been common to see 2-4 blues a day right now.  Nice job ladies, way to represent the great state of TEXAS!